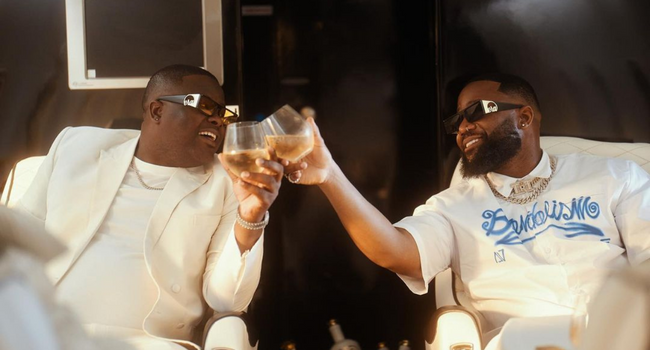 Cassper Sheds Tears As He Gives Speech At DJ Sumbody’s Memorial Service. The popular South African DJ who was brutally killed this week will be laid to rest. Family, friends, and members of the music industry assembled in Pretoria to remember Oupa Sefoka, better known as Dj Sumbody.

Dj Sumbody was killed along with the person he was in a spray of bullets. The shooters’ identities are still unknown, and they remain on the loose.

Cassper Nyovest was amongst the late DJ’s friends who attended the memorial service in Pretoria. The rapper was a close friend of DJ Sumbody and the two were always spotted together at major events including Cassper’s Celeb City boxing matches.

Addressing the mourners Cassper Nyovest could not hold his tears as he gave his last respect to his long-time friend. The rapper shared how he gets to know the prominent DJ and how the two went on to form a good relationship in the music industry.

“I’m here to talk about my friend, me and DJ Sumbody met a long time ago, and I just knew him as a DJ,” he said. “I don’t know where he took my number from but when he was on radion he would call me every to give me an interview without letting me know anything before.”

“He was also very grounded, very rooted, it was sort of you have a father and a friend in one person. He asked very simple questions that were very difficult to answer. But after that question you really re-evaluate your life, it was like a reset that you needed, that was DJ Sumbody,” Cassper added.

Cassper stormed into tears as he revealed how special DJ Sumbody was in his life mostly during difficult times and how it is a massive loss to everyone who was close to him. “When you had a problem whether business or personal there was one person you could always call, you could be brutally honest with him and he would take no offence, no matter how much you fought with him he wouldn’t change how much he loved you. I’m going to miss you, I love you,” Cassper said.

December 7, 2022
SA Rappers Who Failed To Deliver Their Music Projects In 2022

SA Rappers Who Failed To Deliver Their Music Projects In 2022

December 7, 2022
Manage Cookie Consent
To provide the best experiences, we use technologies like cookies to store and/or access device information. Consenting to these technologies will allow us to process data such as browsing behavior or unique IDs on this site. Not consenting or withdrawing consent, may adversely affect certain features and functions.
Manage options Manage services Manage vendors Read more about these purposes
View preferences
{title} {title} {title}